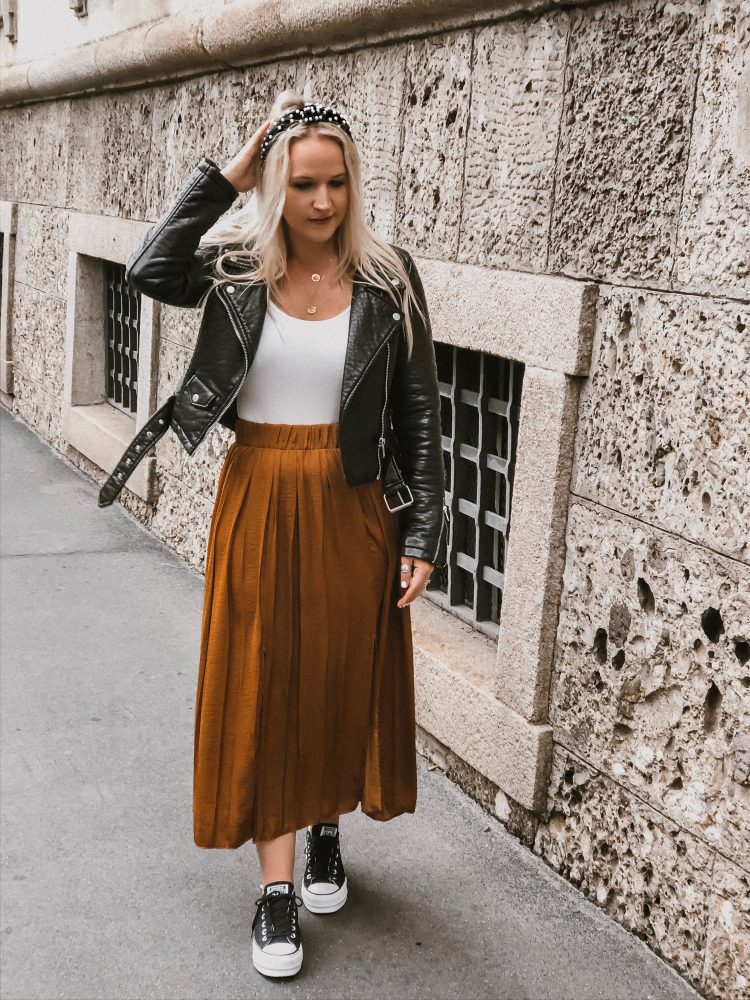 I’m back from our trip to Europe! It’s a weird feeling when you come back from a trip you’ve been planning for awhile. I’m still trying to get my schedule back on track but so far I’ve been going to bed early and getting up super early.

When we landed in Milan, in was about 9:00pm in Italy and I slept maybe a total of 2 hours on the plane. I thought I would have an easy transition to the new time zone because I was SO exhausted that I figured I would easily fall asleep when we got to our hotel, which wasn’t until 10:45pm. We ended up not going to bed until 1:30a because getting pizza was priority, duh, and I think I pushed past the exhaustion and then randomly had energy. Anyways, after going to bed at 1:30a we were both wide awake at 3:45a! For about an hour I tried falling back asleep but it wasn’t working, so I got up. This was a big mistake because the jet lag snow balled into several days, so I truly didn’t feel like myself until maybe 4 days in.

But since we got up so early the next day, we went exploring Milan pretty early….looking for coffee of course!

We only stayed one night in Milan but we had been there before so I think it was a good amount of time. I do wish we had more time in our wonderful hotel though because it was so cute and the hosts were so friendly. We talked about staying there again the night before our flight since we had to come back to the airport, but we decided to be closer to the airport and ended up staying at a crappy hotel (by accident) and I got zero sleep that night, LOL. So I did regret not staying here again!

The last time we visited the Duomo di Milano, I wasn’t allowed inside because my shirt didn’t have sleeves, so Mike went in by himself and took some photos (not sure if you’re allowed to). It is pretty extraordinary inside, according to the photos and what Mike said, LOL. This visit we didn’t try going inside because we didn’t have a ton of time, plus I was beyond tired at that point and I probably would’ve fallen asleep (it’s dark in there). There were also several long lines outside, so I think it takes longer to get in then it used to.

So instead we navigated to Marchesi 1824 for some coffee and breakfast… both the coffee and pastries we’re so good. I felt like I was in Breakfast at Tiffany’s because it’s such a pretty shop 🙂 It’s located in the Galleria (the shops right next to the Duomo) and above the Prada store. We had trouble finding it at first and Mike thought I was trying to take him to Louis Vuitton because it happened to be next to it ?

Originally I had planned to wear sandals with my outfit but when we woke up it was wet from raining overnight and colder than I expected so I went with sneakers instead. This skirt was the perfect choice, even though it was a little chilly outside I’m happy I still wore it. It’s almost sold out but I also love this one and one this one. The rest of my outfit details are below but I want to mention this headband real quick because it’s so chic! Every year around fall and the holiday’s I love headbands (reminds me of Blair from Gossip Girl) but they never look good on me. I think we can all agree that most hair accessories only look good on someone with really thick hair or hair extensions… headbands included. Even though the curls in my hair had fallen out in about 2 minutes, this headband still worked! 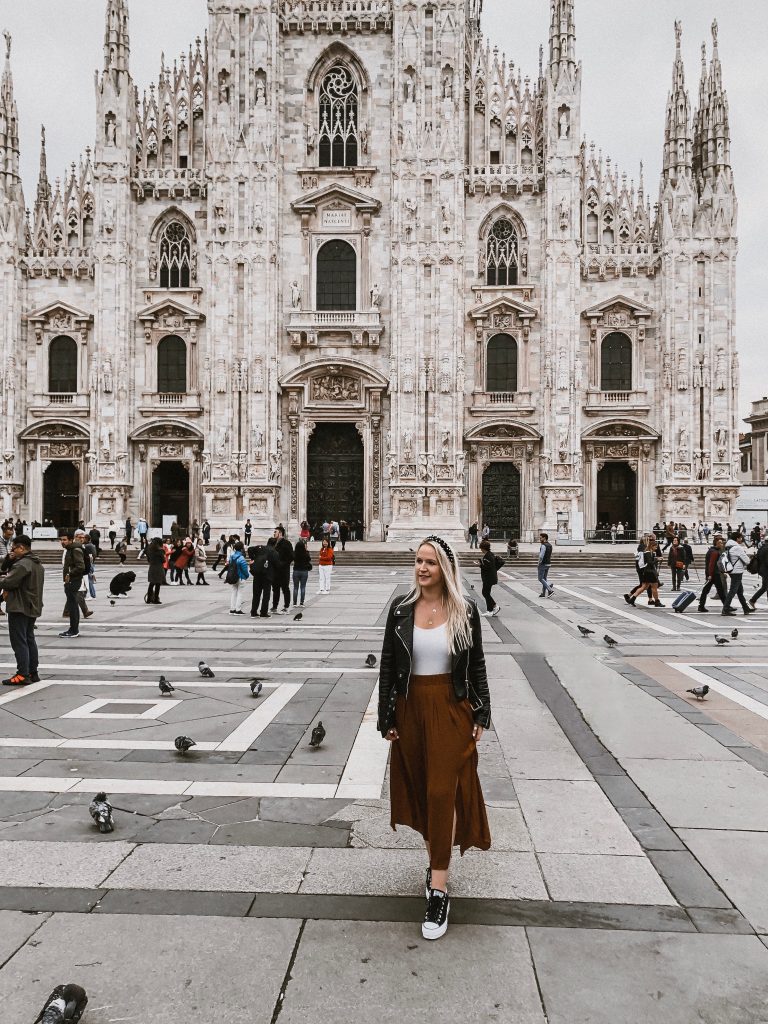 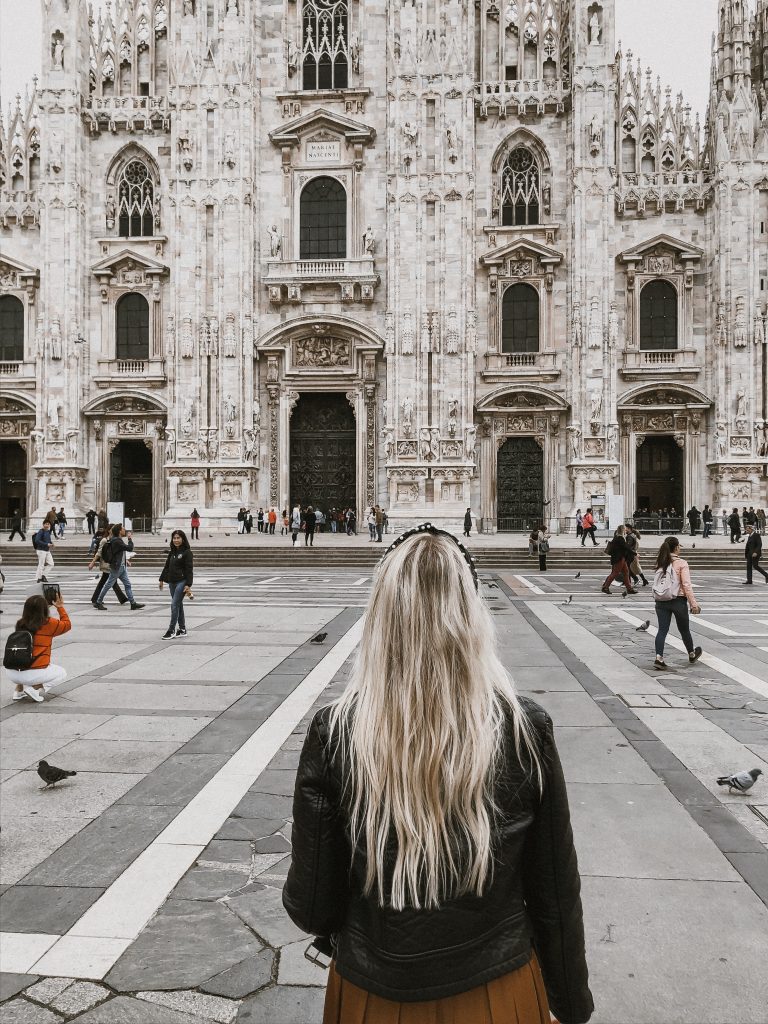 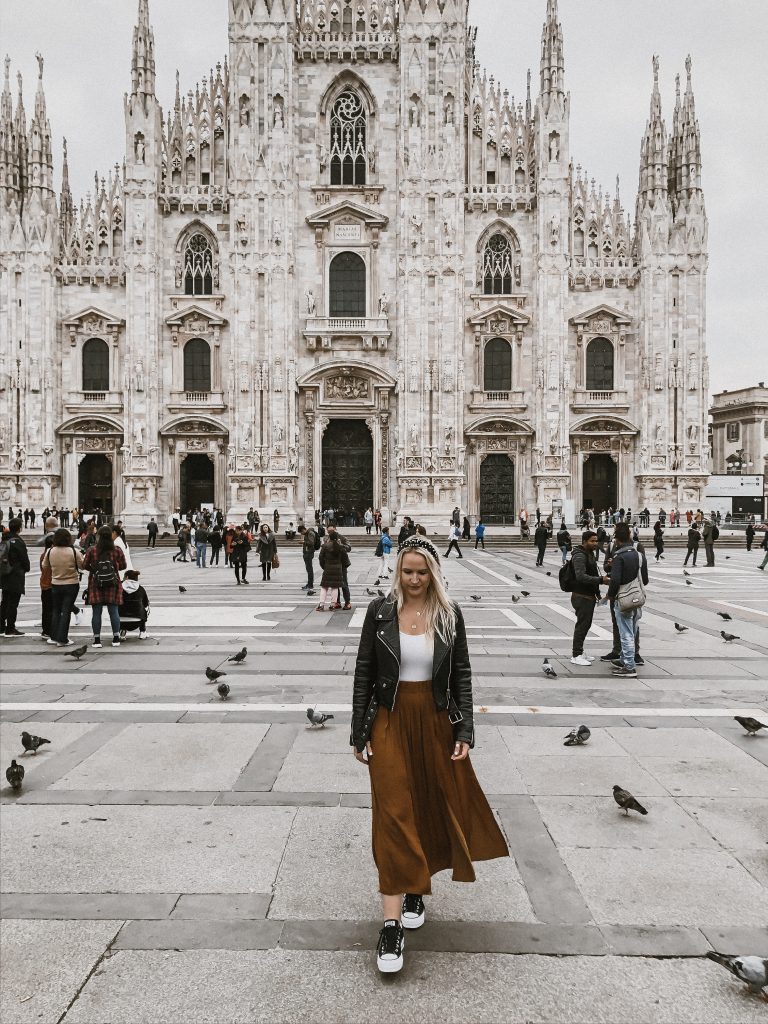 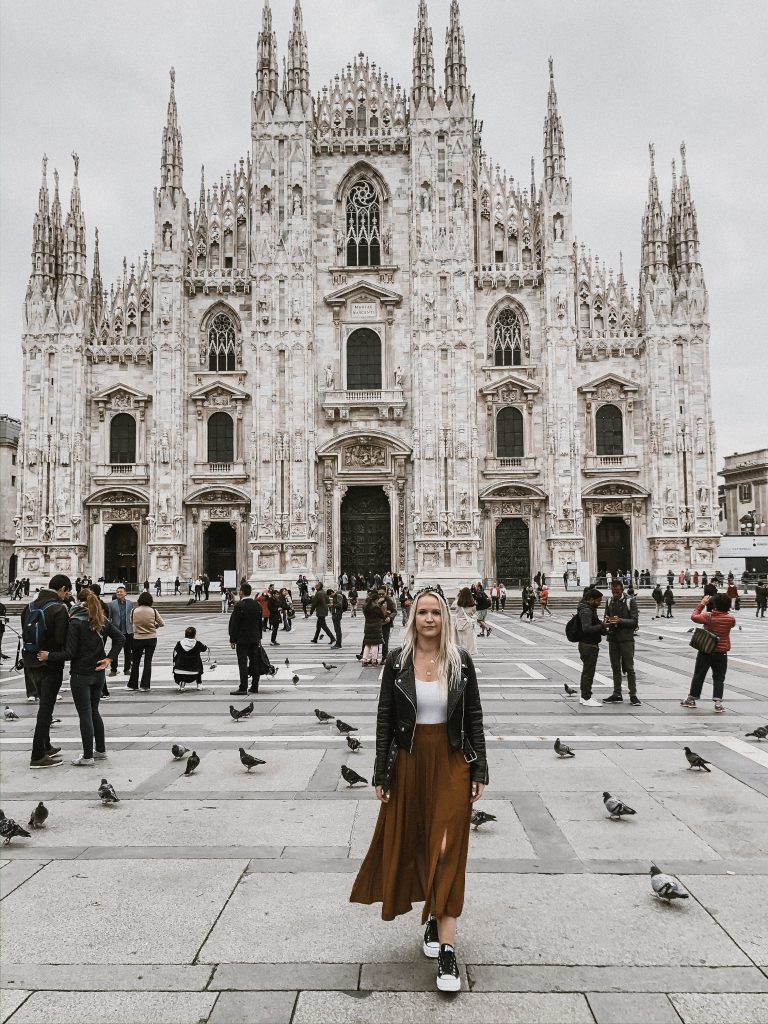 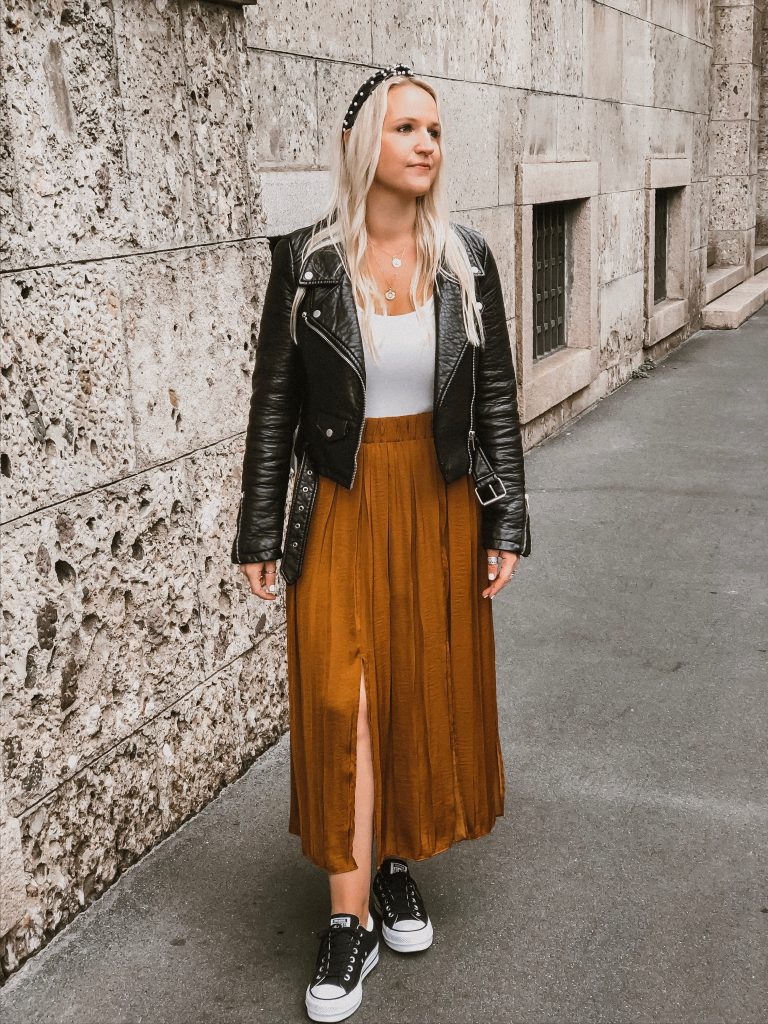 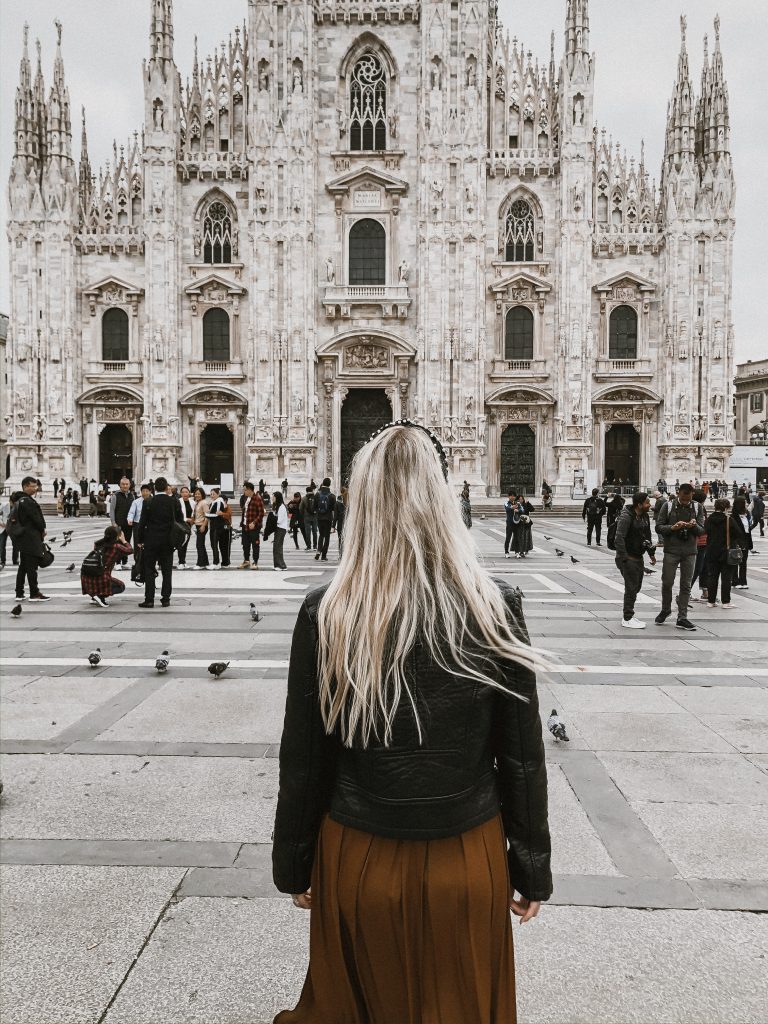 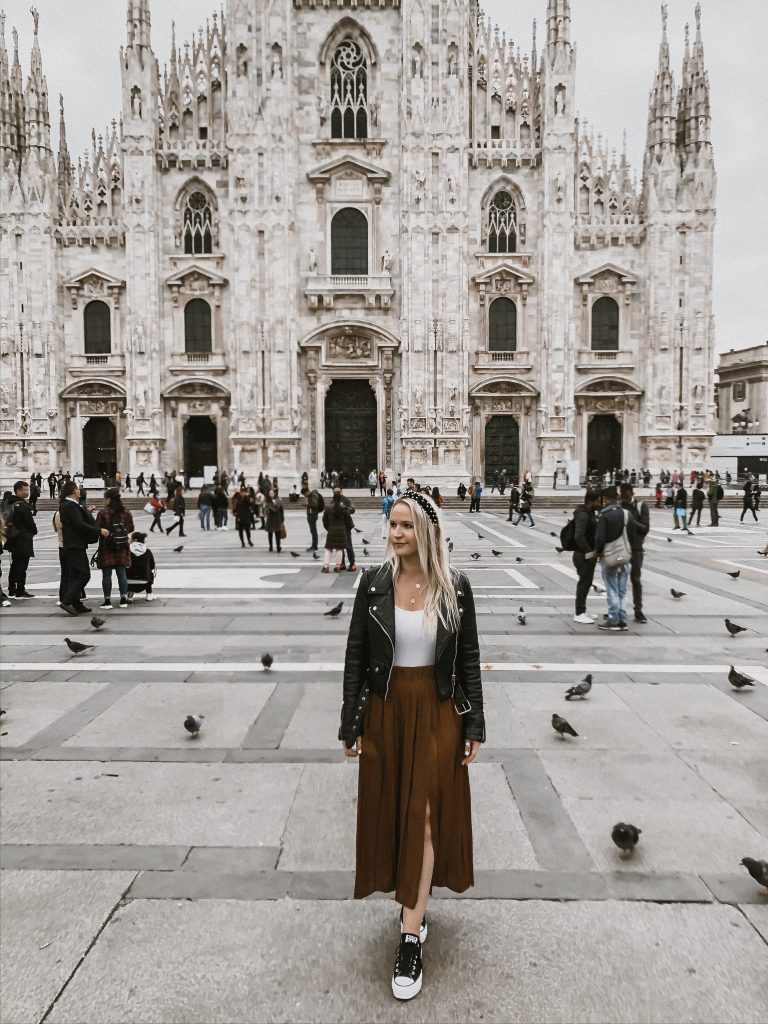 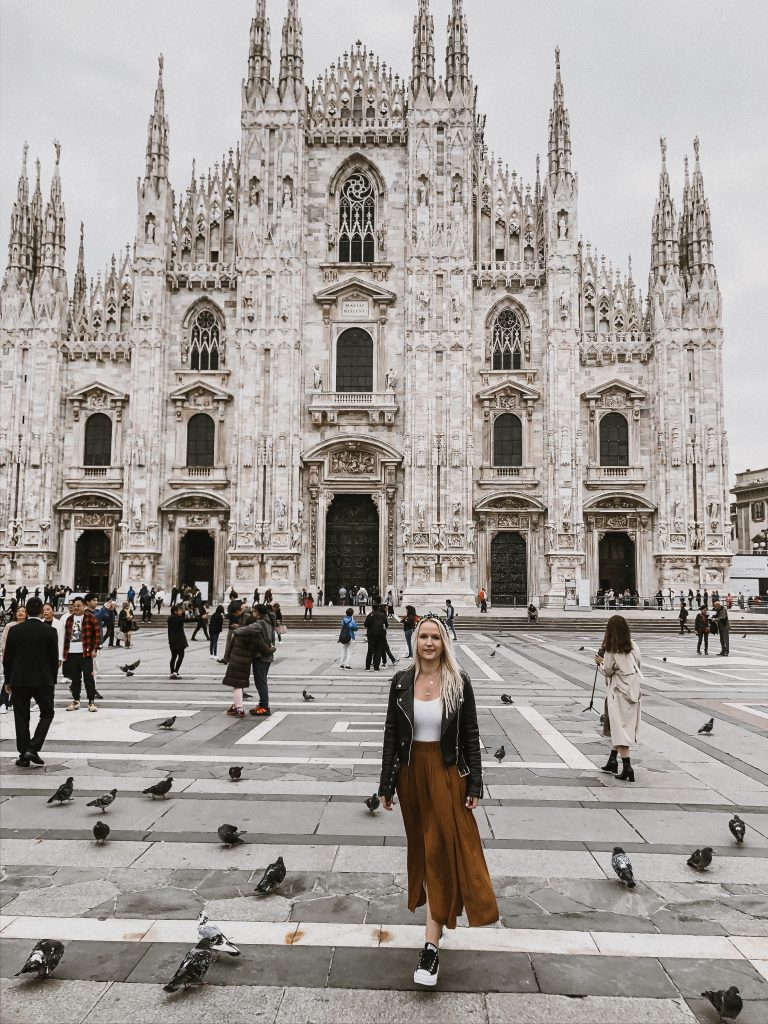 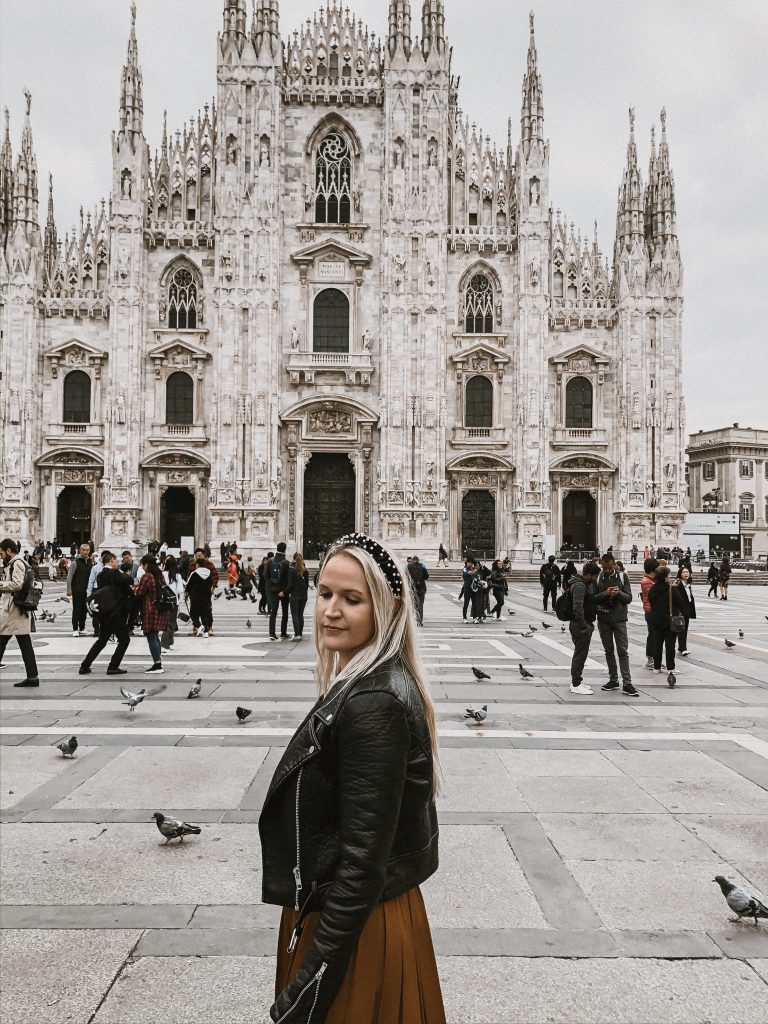 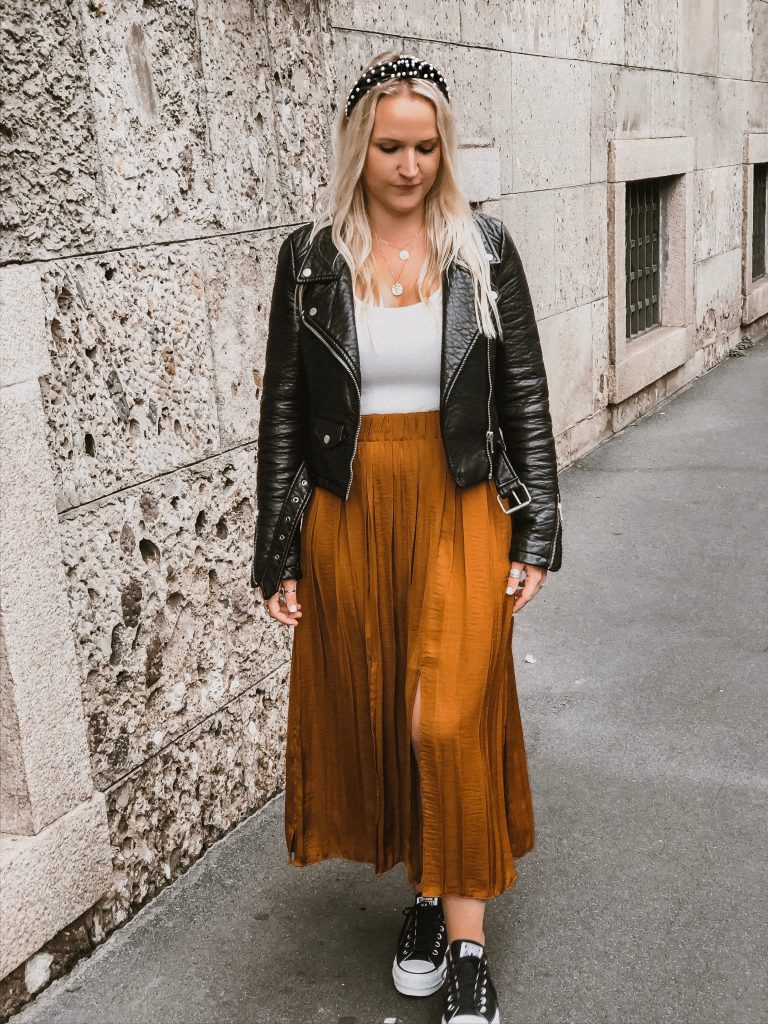 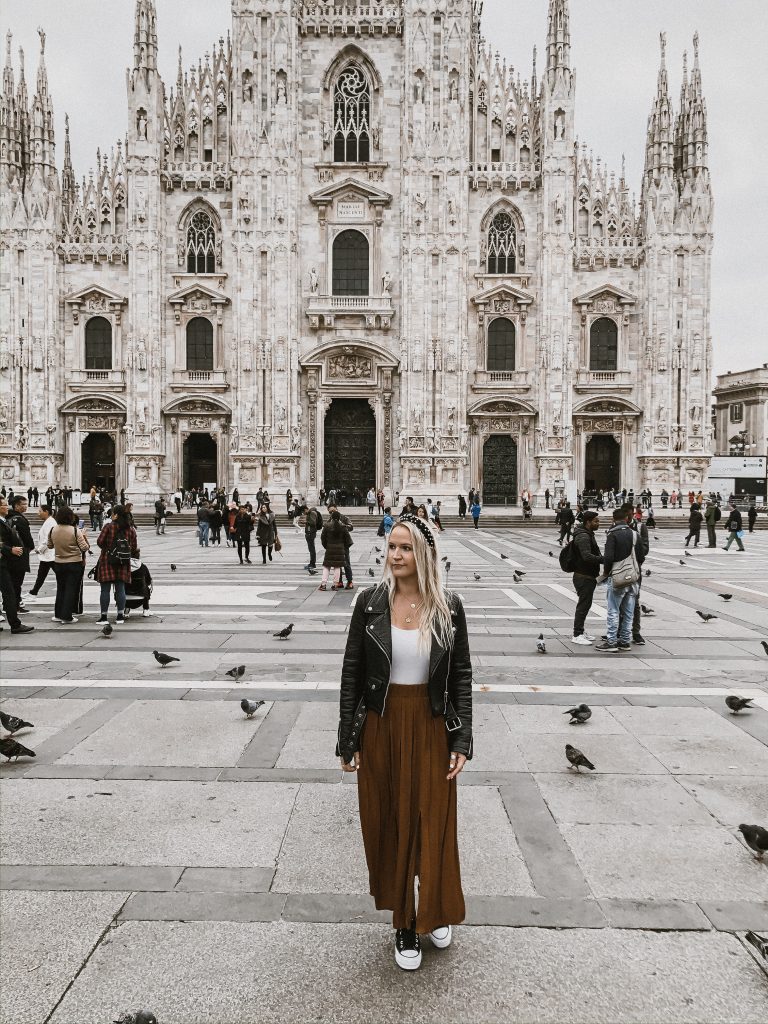